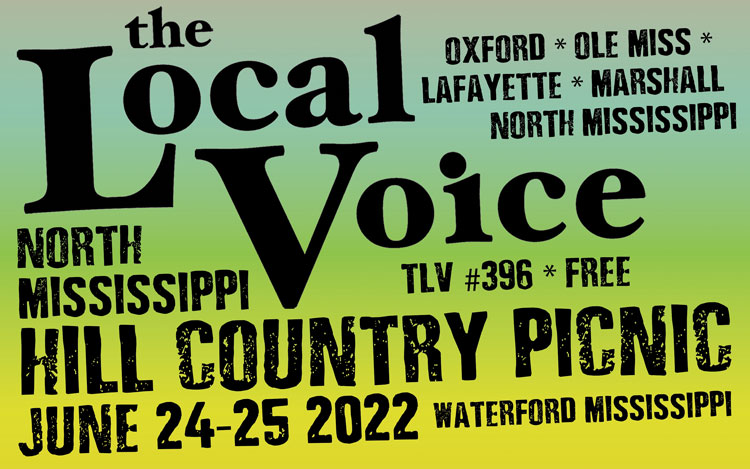 106
SHARES
ShareTweetSubscribe to Email
Subscribe now and have TLV's Weekly Dispatch delivered to your inbox.

The Local Voice media company in Oxford, Mississippi is PROUD to partner with Kenny & Sara Brown to bring you the Official Festival Guide of the North Mississippi Hill Country Picnic.

There are FREE souvenir copies printed and distributed around the Picnic, at the Front Gate, Snack Bar, Merchandise Tent, and a Digital Download is here. All are limited editions.

Scroll now for Info and Links to all the Artists at the North Mississippi Hill Country Picnic.

Robert Kimbrough Sr continues the Cotton Patch Soul Blues style created by his father, the legendary Junior Kimbrough. From an early age, Robert was steeped in the sounds and life of North Mississippi and it’s distinctive style of blues.

Rocket 88 was formed in the summer of 2005 and their Mississippi soaked sound is a local staple.

Kudzu Kings are the Roots Rock band from Oxford, Mississippi. Their sound blends Country, Bluegrass, Blues, and RocknRoll, with a traditional dose of Hill Country improvisation.

Kent Burnside hails from Holly Springs, Mississippi, and is the oldest Grandson of blues legend, R.L. Burnside. His playing dots the globe, and his style is unlike any other: dark, hypnotic, inviting… and very dance-able.

Local legend Cary Hudson is a singer-songwriter and guitarist from the great state of Mississippi who resides somewhere between Memphis and New Orleans. You might remember him from Blue Mountain, but Cary is a legend all on his own.

Guitarist, singer, and songwriter Duwayne Burnside is one of 14 children born to R.L. Burnside. He has been a frequent performer with the North Mississippi Allstars since the early 1990s. The young Burnside learned his first few guitar licks and chords from his father, but proved a quick study and soon began playing with local club owner Junior Kimbrough & The Soul Blues Boys.

While their love of music began long before their love for each other, Christine Conley and John McDowell have combined the two to create fun and inspiring songs that will leave you smiling.

Just Groovin’ Experience musical performances from various Memphis musicians and singers from all walks of life.

Libby Rae Watson is an authentic Blues woman who has been playing since the early 1970s, when she discovered the Blues in her hometown of Pascagoula. She helped organize the talent for the very first Delta Blues Festival in Greenville, Mississippi in 1978.

Libby Rae has played many festivals and music venues all over the world, as a solo performer and collaborator.

Marlow Dorrough is the drummer and guitarist from Ruleville, Mississippi. He is the son of legendary Mississippi guitarist Duff Dorrough. He has played with The Revelators, Solar Porch, Brad Moneymaker Band, and many more.

Trenton Ayers has been playing guitar since age four in the Holly Springs area. Trenton has played with Cedric Burnside, The Electric Mudd, and more. GRAMMY nominated in 2015.

Memphissippi Sounds is Cameron Kimbrough (Grandson of Junior Kimbrough) on drums and Damion “Yella P” Pearson on harmonica. Their custom blend of North Mississippi Hill Country Blues, Memphis Blues & Soul, Rock, Pop, and Hip-Hop has taken them beyond this region.

Otha’s Granddaughter Shardé Thomas is leading the group in a new direction now.

Eric Deaton is the Torch-Bearer of the North Mississippi Hill Country Blues tradition, having received an apprenticeship first-hand from the masters of this particularly hypnotic, backwoods strain of blues.

He played for over 20 years with the legend R.L. Burnside, who referred to Kenny as his “white son.”

Kenny has released many solo albums and his music has been featured in films. like Black Snake Moan (featuring Samuel L. Jackson).

Most recently, Kenny Brown has been featured on albums by The Black Keys and Hank Williams Jr.

Alvin Youngblood Hart’s praises have been sung by everyone from Bob Dylan to guitar gods Gary Moore & Mick Taylor. He spent his formative years on the West Coast, in the Midwest, and the Mid-South, but was born in Oakland, California in 1963 to a family of post WWII Mississippi transplants.

After 25 years, twelve albums, four GRAMMY® Award nominations, and sold out shows everywhere, North Mississippi Allstars open up their world once again on their thirteenth album, Set Sail, welcoming other family into the fold.

As legend has it, Luther and Cody Dickinson started the band in 1996 as a loose collective of like-minded second-generation musicians who shared a local repertoire and regional style. Over the years, the lineup shifted by design, and each subsequent record offered up a different combination of collaborators.

This time around, they are mining the talents of Jesse Williams on bass, and Lamar Williams Jr. on vocals.

During the Allman Betts Band Family Revival, the Dickinsons linked up with Lamar, son of the Allman Brothers bassist Lamar Williams, Sr., becoming fast friends, collaborators, and eventually paving the way for the album, Set Sail.

Featuring an all-star lineup of North Mississippi Hill Country musicians, this late night jam is sure to be exciting!