I’ll Take My Stand: “Me and Donald Trump (III)”

“The moral faculties are generally esteemed, and with justice, as of higher value than the intellectual powers.” (Charles Darwin, 1874)

So far, I’ve discussed here and here my puzzlement that so many acquaintances believe that I (of all people!) would support Donald Trump (along with my apprehensions that they might actually be onto something). But, though I’ve entitled these essays “Me and Donald Trump”, so far I’ve written only about me and people I know — not a thing about Donald Trump. And now, I’m about to write about the dramatic treatment of an event that happened almost a century ago. What does that have to do with Donald Trump? (A lot, in my opinion.)

Miss Bernardini was my 10th grade social studies* teacher. One day she had me join with a classmate in an impromptu reading from a classic work of mid-20th century self-righteous secularism, Inherit the Wind. It’s a courtroom drama based on an actual trial that was an international sensation in its day, popularly known as “The Scopes Monkey Trial”. What makes this work’s status as a popular hit almost unique was that rather than being about the baser passions central to so much pop pap, Inherit the Wind depicted a battle of ideas. Specifically, Biblical literalism vs. Evolutionary theory. 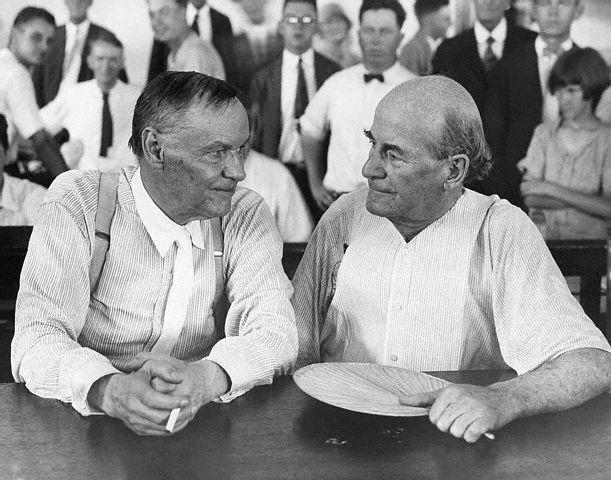 Miss Bernardini chose my classmate Tommy to play the role that was based on Clarence “attorney for the damned” Darrow, and picked me to read the part based on three-time Democratic presidential candidate William Jennings Bryan, a heartland populist. In the excerpt she had us read, the Bryan figure is on the witness stand and the Darrow character is harrowing him about certain Biblical passages that apparently contradict other passages and/or the scientific consensus of the day.

When we finished, Miss Bernardini exclaimed triumphantly, “I knew you’d do a great job!” Not about Tommy’s portrayal of Darrow, but of my rendering of Bryan(!)

I was stunned. To begin with, Darrow was one of my boyhood heroes. I hope everything in life has turned out well for Tommy (I suspect it mainly has), but I doubt he’s spent as much time as I have, pondering how best to balance the right of every individual to personal liberty with the obligation of every civilized society to protect the weak from the depredations of the powerful. (I didn’t become an attorney. But, like Darrow, I still tend to side with underdogs.)

Most surprising of all was that it seemed vitally important to Miss Bernardini to convince herself that, like Bryan, I was for all intents and purposes an anti-science, closed minded Biblical fanatic (though I was something of a science nerd and I don’t think I’d ever read a word of the Bible at that point). An essential (for her peace of mind), reification of a cultural stereotype like, say, Tony Soprano (a blood libel against the other half of my ancestry) is for certain people.

And yet, to give Miss Bernardini her due, here I stand (I can do no other) in Oxford, Mississippi, which some would call (not wholly without justification) “the buckle of the Bible belt”. Further, I own a clutch of Bibles (all accumulated while I was still in NYC). By the time I left there (11 years ago), I’d say I was already more acquainted with the Good Book than most laic New Yorkers (admittedly, a low bar).

Consistent with my bifurcated cultural inheritance, in a given week I’ll attend a Catholic Mass, a liturgically-framed Protestant service, and a midweek barefoot-Baptist style Bible-study lunch held on a factory floor.

The whole premise of the social sciences is that people largely (if not entirely) think, feel, say, and do what those in their environment think, feel, say, and do. If I spend time weekly listening to a highly respected member of the community tell me to love not only the people I already like, but even the ones I dislike, how can that make me any worse than I already am?

So, was Miss Bernardini right all along? Did she accurately perceive that I was culturally bound to grow up to be a Bible-thumping enemy of settled science?

I doubt it. Indeed, I’d argue the premise itself was faulty (not to mention the conclusion). Inherit wasn’t a fair-minded exercise in Biblical criticism. Instead, it was a frontal assault on all Monotheism as the enemy of science and its benefits. If you thought no one could overact more in a courtroom drama than Al Pacino, watch/listen as Spencer Tracy out-pontificates any Pope of my lifetime.

This aria by Darrow is so disingenuous on so many levels that I’ll postpone unpacking it to another occasion. Suffice it to say for now: It’s an objective fact that (observant) Jews, Christians, and Muslims spent an entire millennium saving from otherwise inevitable disappearance neath the shifting sands of time the highest cultural achievements of ancient pagans.

Yet, as secular humanism has advanced and traditional faith waned in Europe, regimes there (especially the militantly atheistic ones) have become ever more viciously murderous, not only in war (where air power has been destructive of a lot more than our awe at the flight of birds), but also in times of peace and relative prosperity.

By the time Inherit was written, tens of millions of innocent civilians had already been ruthlessly murdered in the name of “scientific socialism”. Many tens of millions more would subsequently be killed on the altar of scientific socialism. Yet, Inherit arrogantly accuses everyday people — who, at the bottom line, believe we’re all subject to the laws of a Higher Power over and above the Law of the Jungle — of trying to outlaw thought itself.

Subjectively, I’ve believed humans are descended from earlier primates since I was age 6 (another story for another time). Concomitantly, I’m not among those of the current era who rigidly dismiss inferences about humans based on Darwin’s ideas about natural selection as “dangerous junk science”.†

But, apart from the dishonesty of the premise that Monotheism has been an obstacle, rather than one of the prime engines, of advances in human civilization, to what degree was Miss Bernardini’s having me publicly present myself in that way an instance of self-fulfilling prophecy? In other words, to what extent am I here in Mississippi because, in so many ways through the years, it was made clear that my sort (ie, the sort that is deeply skeptical of the Marxist narrative about America) was not welcome in downtown Manhattan?

What does this have to do with Donald Trump? As noted, the Scopes Trial took place in 1925. The play Inherit the Wind debuted in 1955 (when Trump was nine). The movie version was released in 1960. And yet, in the wider scheme of things, I think this work exemplifies how educated urban elites have viewed “the people of the land” since antiquity. And thus, Inherit’s narrative anticipates the degree to which current urbanites despise Trump supporters as, in large part, a basket of irredeemable deplorables who bitterly cling to guns and religion.

I’ve never denied the width and depth of his character flaws. But in sharp distinction to educated elites, when it comes to the subject of working class Americans, Trump unfailingly accentuates the positive. And that, in my opinion, has made all the difference.

* As previously noted, a century ago my Grandma Russell taught History and Civics in Pine Bluff (Arkansas) High School. By the time I was in a New York secondary school, the same subject matter was being called “Social Studies” — to my wonderment. Looking back, my sense is that the name was changed to exclude any theory of historical change except the interplay of material and social forces — as opposed to, say, willful individuals, great ideas, or religious passion. Even at that tender time, the name change seemed to me like a red flag on the field, so to speak.

I'll Take My Stand: "Give Me That Oldtime Religion"
Dr. Charles R. Wilson on the 21st Century Southern Cultural Renaissance

University of Mississippi’s Gertrude C. Ford Center for the Performing Arts to Get Renovated Green Room →