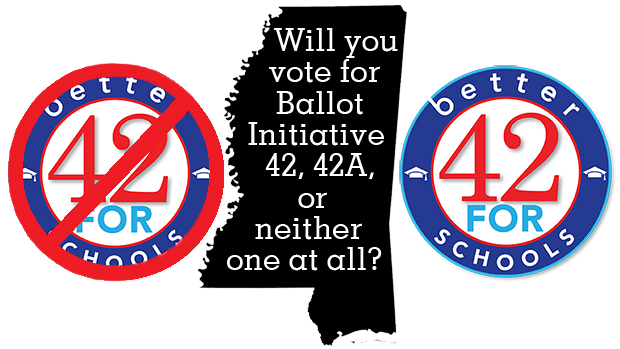 Initiative 42 v. 42A: Why only the former guarantees full educational funding (by Geoffrey M. and Leigh Long Latham)

289
SHARES
ShareTweetSubscribe to Email
Subscribe now and have TLV's Weekly Dispatch delivered to your inbox.

As we all know, on November 3rd, Mississippians will be voting in the General Election. There has been one hot topic burning through nearly all of our discussions, whether around the dinner table or on social media: Initiative 42.

The original initiative proposes that public educational opportunities afforded to any and all children of Mississippi should be fully funded, as the state law from 1997 mandates. However, Initiative 42 proponents claim on their website that this law has only been fulfilled “twice in nearly 20 years.” Twenty years is an awfully long time to not follow the law, don’t you think?

Their website also claims that because of this shortsightedness, public education funds have actually been shorted $1.7 billion in those 20 years, enough to pay for thousands of qualified teacher salaries—with raises. It is no secret that our dear old homestead is bleeding educators left and right. From testing protocols, to constant curriculum changes, teachers are exhausted and seemingly powerless. The resources guaranteed are few and far between, and expectations to compete with every other state in the country loom over the heads of the youngest and brightest.

What could be bought with the nearly $2 billion not in the budget? Well, on the 42 For Better Schools site, around 17 million textbooks could be bought. Or 17,000 safe, dependable buses for transportation of our children. Everyone has seen the big, yellow dogs; they haven’t changed much since our days of seat hopping—in fact, some of them appear to be as old as I am. The unallocated funds could also be spent on computers, which would give our students a boost into the current.

Initiative 42 has its opponents, of course. The legislature has put up Initiative 42a. Creative, huh? Initiative 42a is the legislature’s alternative to the brazenness of I42. It is so uncomfortably similar that it has sparked controversy all over the state. Initiative 42 questions, “Should the State be required to provide for the support of an adequate and efficient system of free and public schools?”

“Adequate and efficient” are the key words here. Adequate, in this context, seems to mean that every child should get what they need in order to be successful. Which doesn’t seem to currently be the case. In the context of the initiative, efficient means that the state should make sure that every child receives what they need in order to be successful within reason and without waste; perfectly reasonable. Initiative 42A poses the alternative: “Should the State be required to provide for the support of an effective system of free and public schools?” Here we have the change—effective. Effectiveness is subjective to one’s interpretation. What I think is an effective system, may not be what you think is an effective system. And who is left to determine the effectiveness of said system?

If the language differences in these options seem like splitting hairs, it is important to remember that this language will become the crux of litigation regardless of the outcome. If the ballot initiative fails, those who have fought to ensure that Mississippi’s children and future are guaranteed an opportunity for an education to make them competitive in the modern economy will pursue legal remedies to their valid concerns for the state of education in Mississippi. If the ballot initiative passes, those who have a vested interest in maintaining the status quo will gear up for circumventing it through the courts. Initiative 42a is a means to make that fight easier for those who do not want any kind of change.

This issue, anywhere else in the country, would not have to be a partisan issue. Conservatives and progressives in other states might disagree “how” to make education funding a priority, but only in the Magnolia State is the fight about, “if” it should be. Complex issues require nuanced solutions, but after a long enough period of time a problem can boil down to its basic elements just like a pot left too long on the stove. The basic element is this: Is education important enough for our state’s future to do something about it or not? What is in contention is an increase in taxes, a change in financial policy, some shuffling around of resources, and real legal consequences for the state government to do what it has said it will do as a matter of law to provide a better future for all the children of this state. The essential question (to employ an education term) is whether competitive education in this state, for all of its children, is a priority or not. No one want higher taxes, no one wants children to have to go without what they need to succeed, no one wants to let go of their tightly held ideologies and the political agenda to which they identify. But this issue isn’t about our differences and a various assorted and sometimes conflicting interests. This issue is about making the public education system in Mississippi no longer a tragic joke when compared to other states. The grand balance of our American way of life is always one of competing equality and freedom. There seems to be the idea that a gain in one means the loss in the other and in many circumstances, mostly hypothetical and idealized, it may be the case. We have so much to be proud of as a state, so much vitality and culture, but we have much to be embarrassed about as well.

So in the election a few days away there are three basic choices: No (keep things just like they are), Yes 42 (change things to make education a priority in the state and back it up by law), or Yes 42a (let’s make things look a little better without really doing much to change the real problem). Or to put it in terms of a disease rotting away at the life of our state, no, don’t treat the disease. Yes, take an antidote for the disease, even if it has some unpleasant short term side effects, Yes, take two aspirin and see how you feel in the morning.